Michael Timler's fine store Harponline in conjunction with its fully-developed Harponline Service System enabled me to convert Richter harps into other harmonica tunings. I owe much to Michael Timler's Harponline and Michael's competent and patient advice, which has opened a new horizon of creative and flexible possibilities in harmonica modification.

In later years Michael offered custom tuned harps at harponline with such a high quality that I didn't modify harps by myself any longer. Thanks to Michael's customizing service I was able to experiment with different layouts and develop concepts as the "Henkerstimmung", "Blues Bender" and "Optimized Blues Tuning". Today you get reedplates in special tunings directly from → Michael Timler at Hohner.

Michael Wolkstein from Tube Amp Check in Bielefeld builds terrific custom tube amps. It's he who made my → "Wolke 7" - a custom harp amp with Fender Champ and Fender Princeton preamp section - you can listen to it on Harp Harmony Shuffle and on Minor Shuffle.

Steve Baker is the author of "The Harp Handbook", a fundamental benchmark for harmonica players, offered excellent schools and workshops and now three CDs with playalongs. The CDs are so strong musically, that you can also isten to them, not as an educational tool, but as music cds. His playalong, "Doublecrossed and Blue," is my favourite.

Steve persuades the listener by virtuosic improvisations and an instantly-addictive, hypnotic tone. He has recorded this sound on several cds with Chris Jones, Abi Wallenstein and many others.

Dave Payne Sr., of Parkersburg, West Virginia, nice enough to correct the English version of this page. Dave is a professional writer and customizes harmonicas. He has specialized in making "The Elk River Special", a customized harmonica which you can see on his web page (and order there too). 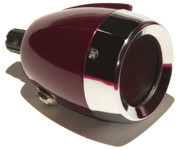 I found Dave "Technobird" Wren's Harp Mic Shop following a hint by Kellie Rucker. When I heard her play through her pink "Turner"-Mic I also wanted that fat vintage sound. Dave presents wonderful selfmade and selfrestored Vintage Mics for a very fair price in his Harp Mic Shop.

My silver Turner-Mic you can listen to on Harp Harmony Shuffle after the e-piano solo (mic directly into the tube preamp) as well as on Minor Shuffle on the left channel during the first 2 x 12 bars (mic into Sans Amp and then into the tube preamp), in the major part and here and there. It is shown on top of this page.